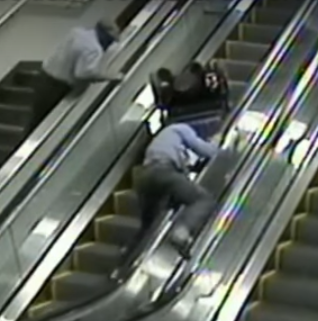 None of us were there. And so far we have, at best, only one airline or its third supplier.

Unless someone has personally experienced the neglect, contempt and, of course, blatant disrespect and humiliation that disabled passengers generally face, especially in this day and age when they have to pay for virtually everything, making caring for disabled passengers even more unpleasant for idiots who advocate extreme, even sadistic business models, some airlines want to cut everyone’s throats now that the industry has become Wall Street’s piggy bank due to the almost total absence of meaningful competition (aka OLIGOPOLIA) ; plus

Things like checked baggage, which can be optional (as if, but I’m playing along with the game of idiots who think you should pay extra for milk and sugar when you buy a cup of coffee…. Or pay extra for ketchup for burgers and fries). – Is it anything but for most disabled passengers.

This means that a disabled passenger will now have to pay at least $50 on most flights.

Some would say he’s discriminating against himself …. but, well, I’ll leave that to the legal experts.

We only factor in the extra $50 upfront for fare search, since neither of us have affinity credit cards, and although he travels to Europe and Asia (about once a year for each) and now flies NYC-SFO every 6-8 weeks for work, it’s still not enough to get status, now that FF miles are devaluing so much.

If you are traveling with a colleague who has status, checked baggage fees are waived. But if he flies alone, $50 will be added to the ticket price he paid.

Sure, his company covers the cost of checking in luggage, but that’s still $50 more than an already very expensive plane ticket, because a $900 round trip between New York and SFO is still a lot of change.

And if we fly together, we have to pay the extra $50 out of our own pockets.

Because it’s so easy to get a suitcase through security and the airport when one of them is disabled. ….

It’s also a thickening of the madness.

Please, no one expects singles. Or rather, most of the usual pamphlets ….

But if the row spacing becomes less than 32, that means we (or his airline) MUST pay a surcharge for E+ on Delta (or other airlines), because anything less than that causes all sorts of problems for my partner and the people sitting next to him, who may have to climb over him to go to the bathroom, because at least he’s guaranteed an aisle seat after making arrangements with the airline for his flight.

And he’s not very tall, so if it’s bad for him at all, one can only imagine how much harder this sadistic thickening is for those taller than him, like 5.5 feet.

The problem of neglect and abandonment is then so trivial that the shock is now when it is NOT.

For example: Our recent trip to the Southwest, where my partner and all the other disabled passengers on our flight had to rot in the plane on IBB for so long (at one of the farthest doors from the C train, no less) that the entire plane was empty, even after we were stowed, The captain personally intervened to get the wheelchairs into the net, then chased my partner out himself, before I took over from the flight attendant and pushed his wheelchair from the other end of train C to the door of train B, where our connecting flight departed – not a short walk.

Long wait times or even complete flight cancellations should not shock most disabled passengers, especially when our flights arrive.

It’s fair to say that on our last two United flights in the last six weeks, the handicapped service was very good at both ends of the trip.

Since the Dr Dao incident earlier this year, United’s overall experience of disability services has improved significantly, as we/my partners have found.

Prior to Dr. Dao’s shooting, however, United’s treatment of passengers with disabilities was exceptionally poor – even by the Disability Services Department on a more than 15-hour flight to/from Shanghai, China, in March 2016.

But in the half-dozen trips we’ve made since mid-April, we’ve found that United is much better than it has been in recent years in terms of on-site service for people with disabilities.

The delta is generally good too – EXCEPT at Terminal 4 of JFK Airport, where it is often particularly bad … in an airport where the RJ gate (also known as the bus terminal) and many mainline gates are so far apart that it takes at least half a mile or more to reach the security checkpoint.

One trip was so bad that I had to call Delta Disability Services to intervene on his behalf, and they had to delay his plane that he had waited so long for (even though he arrived over two hours before the scheduled departure time of the early Sunday morning flight to Los Angeles)….

…and last November, on a morning flight to SFO, I accompanied him (as I do now when my schedule allows) to JFK to personally escort him to the airport, using the gate pass for the business trip he was taking.

And it wasn’t exactly Delta at its best:

The careful scrutiny of the officer who lied when I was told that I was not authorized to escort him to the door, and when this matter was resolved (I find the relevant sections of the federal regulations specifically stating that he is entitled to a non-escort, and I demand to speak with his supervisors when he was often lied to – many clerks have heard .) was preceded by an epic wait similar to the one described above, which led to me calling Delta because I was not with him at JFK when it happened.

This time everything went well…. but only because I had worked at JFK Airport for several years and knew the vendors, who does what there and how things work to let the manager know that further delay would probably be bad for him.

After this discussion we were on our way to PDQ …. with a rockstar escort and on a golf cart that was ready to go as soon as we passed security.

But it shouldn’t be a friendly reminder (I went very slowly that day) of someone who speaks flippantly about his past work to move things forward….

And if I hadn’t been there that day, as things stood, he would probably still be waiting to be taken to the door! That’s an exaggeration, of course, but if I hadn’t been there that morning, I’m sure I would have gotten messages about the wait time and the fear of seeing his flight leave without him, as it would have the other time if Delta hadn’t intervened in a very aggressive manner, usually a very good service table.

I also had to respond to the parents of a good friend who was dropped off in Terminal 4 last year on a KLM flight with codesharing operated by Delta.

Aside from the guilt she felt for booking the flight and assuring her parents that everything would be fine, the situation that eventually spiraled out of control was so humiliating that her mother burst into tears.

It doesn’t have to be this way.

Travel is difficult and exhausting for most of us. For people with disabilities, it’s all the hassle and inconvenience we all know, except for the disabled passengers, who also rely heavily on someone else to help them do things we take for granted, such as going to the door at the other end of the corridor that connects the different contests or even the different terminals, or worse, changing doors at the last minute that requires you to rush from one end of the terminal to the other.

Currently, disabled passengers are left to their own devices.

And that’s just not true. Anyone who says otherwise is a heartless scoundrel.