If you are a traveler and have never visited Cancun and Riviera Maya, you are missing out on some of the best cenotes, caverns and Mayan ruins found anywhere in the Yucatan. Riviera Maya was developed as a tourist destination in the 1970s, and it has grown dramatically since then. There are many different kinds of travel opportunities in Riviera Maya. If you’re interested in history or Mayan ruins, your best bet would be to go to the Riviera Maya, the Yucatan Peninsula, or Quintana Roo.

The Riviera Maya is the perfect place for a great vacation, whether you are traveling here to relax or to experience some of the most unique ecotourism destinations in the world. The area is home to some of the most amazing limestone caverns, natural cenotes (sinkholes), and Mayan archaeological sites in all of Mexico. The combination of these three natural and cultural wonders makes for a vacation experience that is unlike anything else.

Our family has always loved the Riviera Maya in Mexico. Pearly white beaches, crystal clear tourmaline waters, delectable cuisine, and a jungle paradise that never fails to seduce. But what makes this region so special is undoubtedly its unusual character, with its fascinating caves, magical cenotes, and mystical Mayan ruins.

The icing on the cake of a recent trip here is that we felt very safe during our trip and stay in Riviera Maya. Hiding was mandatory at airports and strictly enforced on aircraft. Safety was a top priority at our all-inclusive resort, which only made us feel better about being here. 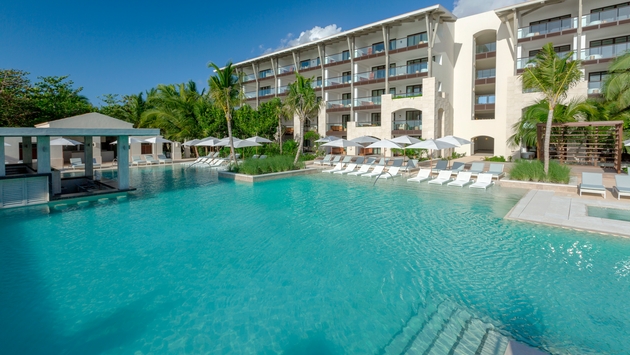 UNICO 20°87° is a spectacular resort located in Tulum, on the beautiful beaches of the Rivera Maya. From the moment we walked into the lobby until we left a week later, everything at this luxury hotel was marked by top-notch service and impressive security measures. It set the tone for an absolutely fantastic experience and was the perfect starting point for exploring the hidden treasures of the Riviera Maya.

Cenotes (sacred springs), which were sacred to the ancient Maya, are freshwater caves created thousands of years ago when limestone collapsed and formed huge underwater reservoirs. These cenotes (pronounced sen-o-tais) were of vital importance to Mayan society because they were an important source of water in times of drought. They were also of great religious importance to the Maya, as they were considered secret entrances to the underworld.

Incredibly, there are thousands of cenotes scattered throughout the region, ranging from the smallest to the largest. Some are easily accessible, and others are on private property, but there are so many that it would take years to visit them all. But we have a few favorite spots in Tulum. 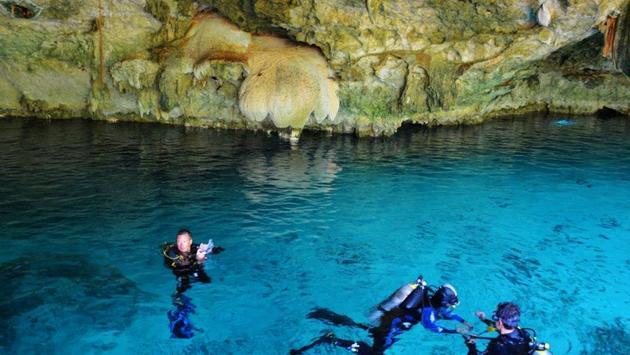 Dos Ojos (meaning two eyes), located in a nature reserve, are two cenotes that come together to form a large cave and one of the longest underwater cave systems in the world. The azure waters are exceptionally cool and clear, offering a welcome respite from the heat of the day and an ideal place for cave diving, snorkeling, and exploration. 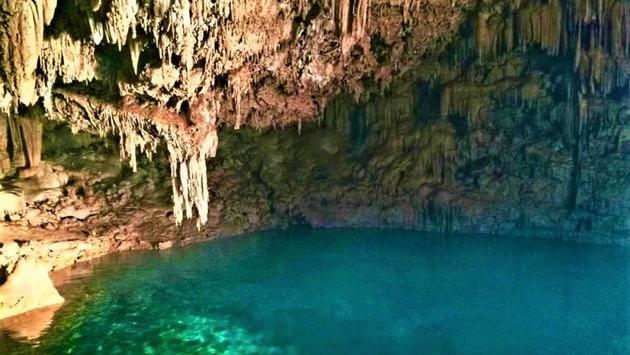 Before entering this cave, we had to participate in a Mayan ceremony and ask the gods to bless our visit. The play of light in these waters is amazing, and the high openings allow exotic jungle birds to flutter around. The Cenote winds through a series of caves, each more fascinating than the next. The stalagmites and stalactites are so impressive that it is difficult to describe their grandeur.

The water is crystal clear, cool, and fresh and reflects blue and green against the rocks. Cenote Yax-Muul is especially popular with divers who come here to explore the deepest caves. 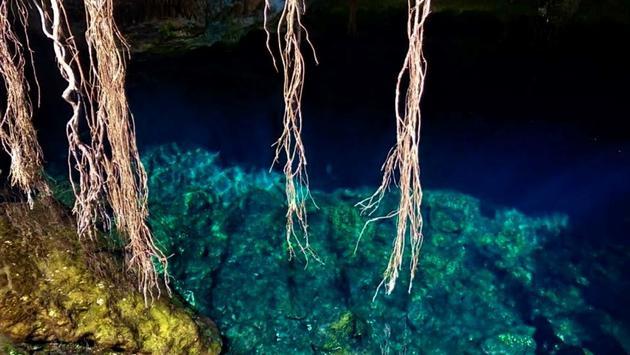 The name of this amazing cenote means giant bird cage in the language of the Maya, and that’s exactly right because birds and bats have made this spectacular cave their home. The chirping birds build their nests in the limestone ceilings, and it’s an absolutely fascinating sight. Jungle lianas crawl through the openings of the caves.

One of the most beautiful underwater cave systems, the Nohoch, is on private property. If you find a local guide, you can gain access to this beautiful place. It’s so amazing, it reminds me of an Indiana Jones movie set.

With our guide, we entered the Kenote through clear, colorful water, and then to dark areas at the bottom of the cave, lit only by a flashlight. Even the National Geographic Diver has published information about this unforgettable cenote in their magazine. After our incredible research here, we can understand it well.

Ruins of the Great Palace of Tulum (Photo via Noreen Kompanic) 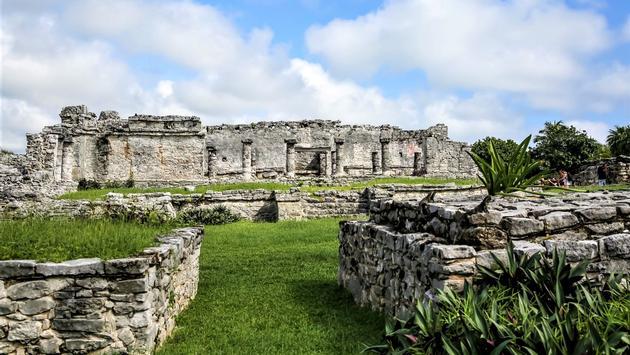 There are hundreds of Mayan ruins throughout Mexico and Central America, but the Yucatan Peninsula is home to some of the most impressive.

The Maya were the most advanced civilization in the Americas. They were one of the six ancient cultures where writing appeared. The base-20 counting system and the complex calendar are two other amazing inventions of the Maya.

They were known for their impressive knowledge of mathematics and astronomy and were an integral part of their religious rituals. But the Mayans were also known for their practice of human sacrifice to favor and feed the gods. 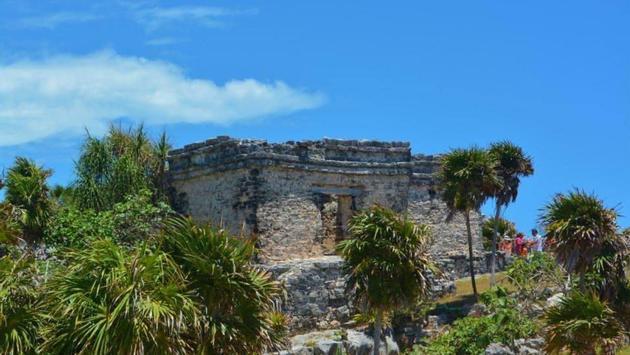 Located on the edge of a cliff overlooking the waters of the Caribbean Sea, the ancient walled city of Tulum was one of the last to be built by the Mayans. Therefore, this archaeological site is still preserved in its original form.

Tulum, the only Mayan city on the coast, was an active seaport where turquoise and jade were actively sold. It is one of the best-preserved historical sites in Mexico and is said to have one of the best magical energies in the world. It’s also one of our favorite dishes.

The main temple, El Castillo, was designed and built by astronomers to be perfectly aligned with the sun during the summer solstice. On the solstice, the sun rises directly through the row of windows of this magnificent structure. 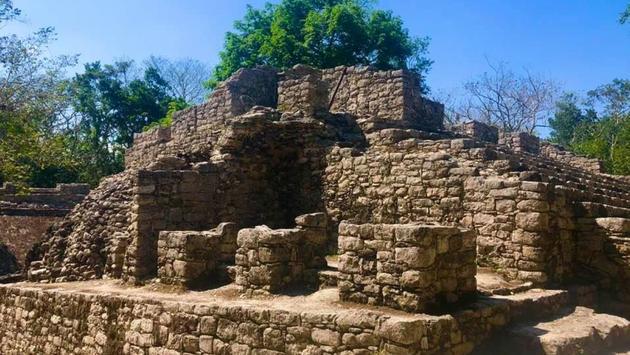 Although many of the buildings in this 80 square mile area of Quintana Roo are still covered in jungle, archaeologists continue to discover fascinating new ruins and structures. Surrounded by two lagoons, Koba was once a thriving metropolis of 50,000 people at the height of its civilization. According to our guide, this will probably be one of the largest excavations of Maya ruins.

By cycling through the jungle paths we were able to see many more structures than on foot. Nohoch Mool is the highest pyramid of the Yucatan peninsula. It is 12 stories high and has 120 steps leading to the top. Although climbing the pyramid was prohibited during our visit due to COVID regulations, it was no less impressive.

Other interesting structures include a series of small temples, an ancient gallery of sculpted stelae (decorative stone carvings), an astronomical observatory, and several ball courts.

One of the most interesting archaeological features of the area is the network of high roads leading from Coba to other Maya cities. It is believed that these roads, called sacbeob, were the equivalent of the highway system and allowed for easy travel throughout the Maya world. 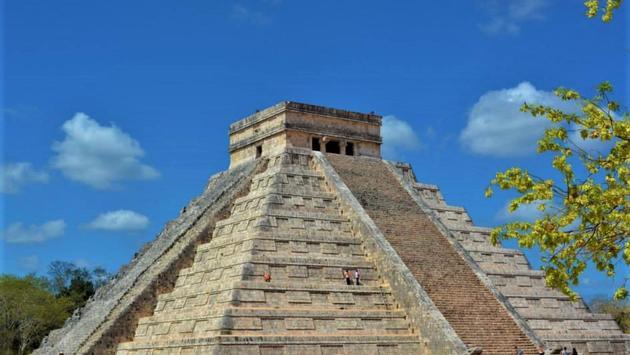 One of the main reasons tourists come to this area is to visit the most impressive ancient Mayan ruins, Chichen Itza, the second most visited archaeological site in Mexico. Although it takes between 2.5 and 3 hours to get here from Riviera Maya, the trip is well worth it.

These massive and impressive ruins show that it was once a magnificent ancient city and an important metropolis of the post-classical Maya period, from 750 to 1200 AD. Chr. stood up. Pyramidal temples, king’s houses, colonnades, and other huge stone structures that were sacred to the Mayans can be found all over this vast historical site.

The most famous and impressive is the beautiful temple of Kukulkan. This huge step pyramid dominates the central plaza and shows the amazing precision of Mayan astronomy and its importance in their religious beliefs.

On the spring or autumnal equinox, the play of light and shadow in the late afternoon creates a moving snake that slithers down the temple’s 365 steps (built to symbolize each day of the year) before disappearing into the ground.

Back in the US, we thought about our next visit to the Riviera Maya. It is guaranteed that more caves, cenotes, and Mayan ruins will be explored. And who knows what else?

This source has been very much helpful in doing our research. Read more about the best cenotes in Mexico and let us know what you think.

Is it safe to visit the Mayan ruins in Mexico?

The Mayans are one of the world’s most fascinating civilizations, and the ruins of their civilization draw millions of visitors every year. However, travelers to Mexico’s Yucatan peninsula should be aware that the region is a hotbed of drug-related violence, much of it related to Mexico’s warring drug cartels. It’s important to keep in mind that drug violence usually takes place far from tourist destinations, so you’re unlikely to be the victim of a crime.

But it’s always best to err on the side of caution and to consider whether or not visiting the ruins is worth the risk. If you do decide to go, it might be a good idea to hire a professional tour guide to accompany you. As the world’s attention focuses on the end of 2012, more and more people are asking whether or not it’s safe to visit the Mayan ruins in Mexico.

Archaeologists say that the Mayan calendar doesn’t end until December 21, 2012, and that there’s no evidence that the Mayan people predicted that the world would end. Experts also point out that the Mayan ruins are located in the Yucatan peninsula, which is farther from the epicenter of the December 21 earthquake. (People who are worried about radiation from Japan’s Fukushima nuclear plants should note that the Yucatan is closer to the United States than Japan.)

How far are the Mayan ruins from Riviera Maya?

The Mayan ruins at Tulum are located some 45 miles from the Riviera Maya. While this may not seem like a short distance, the ride to the ruins will feel much shorter, thanks to the views. On the way to Tulum, you will be able to view stunning ocean vistas, built-up condos, and hotels, as well as farmland and the occasional native fisherman on the coast.

The Mayan ruins in Riviera Maya are not as far as you would think. The most popular tour is Chichen Itza and it takes about 2 hours to get there. Most people say “it’s about an hour and a half drive” but on the map, it looks further than it is. The ruins in Tulum are about an hour and a half away, and Coba is an even shorter drive at about 45 minutes from the hotel zone. The ruins of Coba are the furthest from your hotel but are also the least crowded and the easiest to get to.

Can you visit Mayan ruins from Cancun?

Cancun is one of the most popular tourist destinations in Mexico, with ancient Mayan ruins and beautiful beaches calling travelers to the area. People who are looking for an authentic Mexican experience, however, sometimes have to travel to find the Mayan ruins. Most of the popular ruins, like Chichen Itza and Tulum, are located far from the big resorts of Cancun and Playa del Carmen.

Traveling to Mexico is a great way to experience a different culture while taking in the Mayan ruins that dot the landscape. Many people who visit the Yucatan Peninsula, where the Mayan culture thrived and where many of the ruins are located, often ask about traveling to the ruins from Cancun. This article will explore whether or not this is possible, and if it is, what the best way to travel during your travels in Mexico is.